The Lines Between Poetry and Prose:
Why I Wrote A Memoir of No Memory

Since the publication of The Comet’s Tail: A Memoir of No Memory, the question has come up a number of times: Why did you decide to write this very personal, even risky, story about being wounded and sick? The illness – viral encephalitis – left me in a coma, in confusion, in recovery, and essentially with a big blank pocket of lost time. Collapsed time, expanded time, floating time – disjointed even more in the broken tether of memory. It’s a hard question to answer.

In the twenty-five years since the illness and hospitalization, I have written quite a bit about that time in my life. I have both processed it and accepted it through writing. As a habit, as a discipline, writing was pivotal to my recovery. Because I went into “the summer of no memory” as a writer, the transition to the post-illness writer was direct, one of the few things that remained constant through it all. And I kept writing – journaling nearly every day for years, as the notebooks transitioned into polished and eventually published work. Beyond diary accounts, those journals helped me find my voice as a poet.

A memoir wasn’t on my mind at all, mostly because I wanted to put my creative efforts into poetry. I prefer indirection as a means to ponder and explore life, my own included. In some ways, that indirection sheltered me too. I used the excuse that I didn’t know what was happening to me at the time (comas are like that) so I didn’t have the means to write about it. The parts I did remember – the many months of awkward rehabilitation – reminded me of vulnerability and frustration. I had wanted for a very long time to move on from that episode in my life, not so much to deny its significance or hide it, but to delve into more present aspects of my life.

I also did not have all the pieces of the puzzle; a lot of time was missing, literally. When I tried to fill in the spaces, I was confronted with ugly reminders that I preferred to forget, not reconjure. The best example of this is when I stumbled upon the discharge report from the rehabilitation hospital, where had I spent ten months working to get back to myself and worrying if that was even possible. This memo-style report summarized the results of the final neuropsychological examination that was administered a few days before I went home. It pinpointed in technical language the progress since I was first admitted and outlined the deficits and disorders that I was still in the process of recovering from.

Rereading that document decades later brought a quick and palpable sting. A poem was a more caustic and immediate way to deal with the lingering emotions. The margins of prose were still too close to the medical narratives of diagnoses and psychological critiques.

– After the neuropsychological examination
Like scum floating on a misshapen pond,
the words they use muddle away rooted synapses
and dislocate the whiskers of piquant neurons
who dwell like catfish in the crystal depth
of autonomic storms.

The patient is a twenty-year-old
right-handed woman
and her examiners wear the white coats
of fishmongers
who have bleached away all traces
of blood and empathy and find
no irony in the subject’s failure
to correctly identify muzzle
on the hand-drawn picture card,
straps crisscrossing the face of a dog.

Loose lips and aphasia nominate
the image first as nozzle,
then guzzler and when
the examination is over
paraphasic error is typed
then bound by the nozzle
of a stapler, the guzzler of diagnosis.

The pond is murky, clarity takes time
and verdicts settle slowly. This
she knows now is the long con

and a twenty-year-old female
who is right handed
can hold her breath,
like all good fish,
for a very long time.

The report was the first of many documents that I would rely on to eventually reconstruct those months in a coma and write The Comet’s Tail. This particular report marked the end of that journey: I was leaving the hospital, I was on my way home. This was the victory, the happy ending. The last paragraphs celebrated the progress I had made and recommended continued outpatient therapy. Planning to return to college after a year’s interruption was my goal. While I would still need support, there was no indication in the typed memo that I shouldn’t proceed. But I didn’t get that, not at the time, not when I read the report again. The wound quickly reopened.

The report was addressed to my father and I remember very clearly when I read it the first time. More vivid is the memory of that final neuropsychological examination: the doctor’s office, her white-blond hair, the battery of questions, puzzles, and memory tests. Measurements for cognition, abstract thinking, problem-solving, and sensorimotor-function, as well as assessments of emotional state and mood. During and after, interviews and discussions dragged on tensely. The point of the whole thing was comparative: to measure the changes from earlier testing, to quantify progress, and diagnose the work that still needed to be done.

What broke me during that particular session were the in-time failures, the moment by moment pinpointing of deficits. Inside the world of daily rehabilitation, everything is a work in progress, but that final test seemed to be the culminating assessment of all the work up to that point – mine and the specialists’. I was used to trying to find patterns in a row of differently-sized squares and categorizing place names, but I was unable to really pinpoint the other shortfalls of my now-misshapen brain.

When measuring intelligence, many things are taken into consideration. As most of us know, IQ tests and the like, measure intellectual potential not acquired knowledge. This is why gifted three-year-olds can be given IQ tests. Throughout my rehabilitation, I dealt with personality changes and mood swings. Even as I progressed, I remained vulnerable to the point of silence, frequently breaking down, shutting off verbally. I had lost words. At the time, I could find no distinction between recovery and debilitation. If I’m a train wreck emotionally, and if I can’t summon the next line of “hickory dickory dock” on cue, then I must be a stupid. I must have diminished intelligence. A permanent dope.

Of all the physical and mental therapy sessions that I was aware of, this one interrogation stands out the most. At some point during the interview, I was asked, “Who is the author of Faust?” I didn’t know. It wasn’t that I had forgotten; I never knew this. Through AP English and one year of college, I had never stumbled upon the author of Faust. I knew the story – the doctor sells his soul to the devil – and I know now that to say there is one author of the Renaissance legend is misleading. But that day, I had not yet learned this literary trivia. How could I be expected to summon, never mind remember, something I never knew? It wasn’t a fair question, I thought spitefully, and in my poem, this perceived injustice turned therapists into fishmongers “who have bleached away all traces / of blood and empathy.”

The tears came at the end of that long day, and they came in torrents. And they kept coming when I went back to my hospital room, opened the dictionary I had been given as a graduating high school honors student, and looked it up. Goethe wrote Faust, Johann Wolfgang von Goethe. The “definitive” version at least, a drama in two parts. But that of course leaves one with an incomplete picture of a very old story. And enough bait to hold your breath underwater in a pond of tears.

When I recorded that day in my recovery journal, I did so as a devastated and deflated patient, who in reality had recovered remarkably. When I wrote “Muzzle” later, I attempted to revisit those murky waters of emotion, not cleanse them. That poem isn’t the whole of the story of course, and the gashes left open from that isolated memory have probably not been stitched completely. But I had to take off the muzzle so I could breathe. I also knew that I didn’t want to write a memoir that would be bloody. I knew I would need to find another angle and an alternate tone for The Comet’s Tail. The expanded breath of prose helped me do that.

In some ways, I wrote The Comet’s Tail to practice writing, to try out an alternate method of time travel. Like Faust, stories are never complete, and there can never be a definitive version of anyone’s life. Poems and memoirs are different angles, different stitching methods. Each adds something to the whole, to my understanding of the incidents that make up my life. The fact these various works center on the same life-event tells me that writing is an essential means to healing wounds. It tells me also that there are thin lines between prose and poetry, between chronology and memoir, between patient and doctor. Sometimes the lines are single-spaced; sometimes they are double. 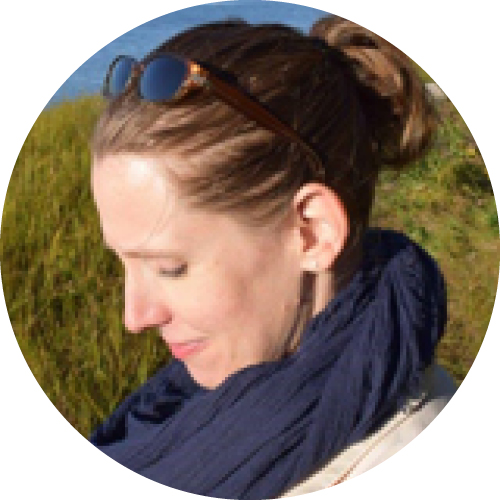 Amy Nawrocki
Amy Nawrocki is the author of five books of poetry, including Four Blue Eggs and Reconnaissance. She is an associate professor of English at the University of Bridgeport and lives in Hamden, Connecticut. The Comet’s Tail: A Memoir of No Memory is part of the Little Bound Books Essay Series and can be found at www.homeboundpublications.com. Follow Amy on Facebook and at http://amynawrocki.org.