A Microcosmic / Macrocosmic
Perspective on Mothering

My primary work is to be a mother. I am a biological mother to my son Gabe, but also, I am a nurturer to my husband, extended family and friends. In fact, if I consider the far-reaching effects of planting trees, recycling and other conservation activities, my actions nourish the planet. As we grow in awareness and compassion, regardless of gender and parental status, we all will wear the “mother” mantle much more. My mothering style includes a useful practice of making an observation of the microcosm, or my intimate, immediate surroundings and situation, and applying that awareness to give further meaning to what is happening in the “big picture,” or macrocosm.

For instance, my husband lost his job in a hostile takeover situation. We got the news via an international fax transmission at about 10AM on a Monday morning. Concurrently, we discovered that our milkweed swan plant was covered in Monarch butterfly caterpillars. The Very Hungry Caterpillar aptly characterizes these little creatures for they stripped a large bush in a matter of a few short days. The thought of them perishing for lack of food activated my own current fear of not having enough, so I hunted around and was able to locate more milkweed at Natural Bridges State Park, where migrating monarchs winter over. They went through two large bouquets before they started to form the first beautiful chrysalis, which looks like a jade pendant decorated with 24-karat gold. 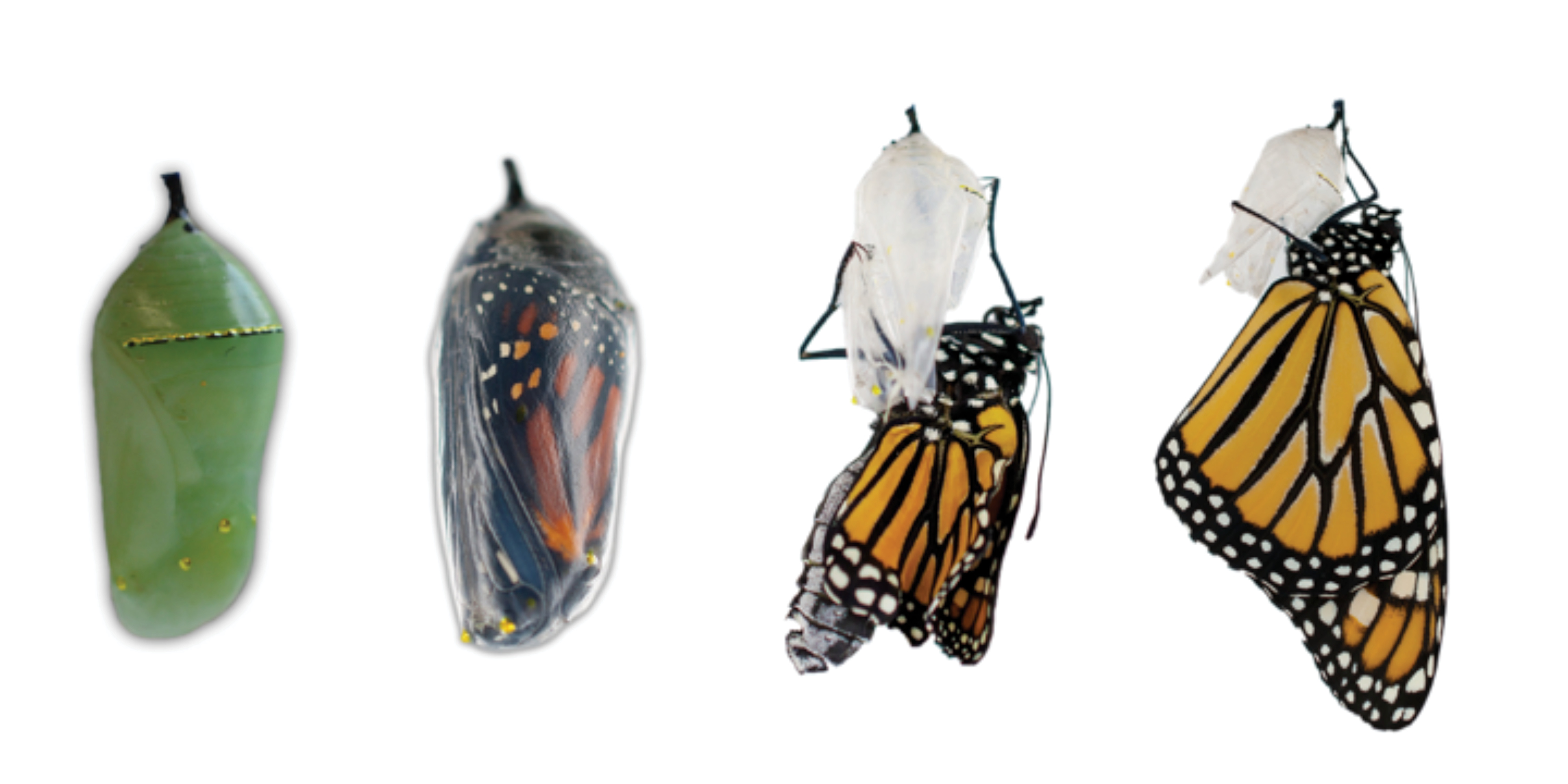 As a family, we spent a lot of time gazing at these bouquets, and watching the caterpillars hunt for food. I could not help but be reminded of our ravenous appetites for more and more. Our living laboratory helped me keep a healthy perspective when we went through our budget. Monarchs go through four different molts of their skin. On the fourth and final molt, they hang upside down in a “J” shape for a number of hours. I observed one of them during the final molt when his body became the gorgeous green case with dots of metallic gold. I noticed the position of total surrender and gained strength from that. I also watched as his body quivered in what looked to be an ecstatic letting go. This gave me a renewed perspective on the situation we were facing with our livelihood.

I watched my husband graciously and professionally draw this portion of his life to a close. I was moved to see Gabe wrap up his piggy bank and write “Dad’s $” on it and place it on his pillow. He was crying as he said to me, “I’m just a kid, I don’t need money.” We also patiently watched the cocoons as the days passed. Finally, the first one turned the telltale orange and black, which indicates the imminent birth of a new Monarch. Upon emerging, the wings are small and wrinkled but fluid from the body is pumped into them and they are ready to fly after a number of hours. They are very tame at first and when presented with a finger in front, they will crawl right on. We offered them honey and drops of water from a popsicle stick and were delighted to see an unfurled proboscis draw forth nourishment. Finally, when we knew they were ready, we carried them outside for their first flight. An inexpressible joy welled up in me as I watched each butterfly flutter away. My concerns about what would happen to us without our accustomed income flew away too as I found a new assignment that replaced that lost income.

Butterflies are teachers of transformation. The thought that we too may have the ability for such a radical change buoyed me as I made a startling connection. If humans are now sightless worm-like organisms devouring endlessly, we could also become beautiful vessels, which harbor new beings through surrender and letting go. There may be hope that a new form of human can break through. We certainly need that because there is a bigger story in the macrocosm of Monarchs and humans.

Monarch butterfly populations have been plummeting for a few decades. When Gabe was small, we always made a winter trip to Natural Bridges State Park to see the Monarchs hanging in enormous room-sized clusters on the Eucalyptus trees. Last Christmas, we made the pilgrimage again and were alarmed to see only a few. Sure enough, further research revealed that Monarch populations have declined by 74% – 80% in the last 20 years. The primary reasons relate to lack of milkweed, their only food. Land that was once filled with this weed like plant has now been developed for human housing and shopping malls. Pesticides, climate change, and logging are also contributing factors. The worst part is that we live in a world where there is minimal evidence of any concern that Monarch butterflies are 74%- 80% GONE.

Again, the microcosm of my experience provided the reflection I needed to further clarify why. Gabe’s friend Anthony is like many boys who like nothing more than catching wild animals. We live in a wonderful natural area with a creek, so he and his friends spend endless hours there. Anthony’s front porch is strewn with aquariums, bottles, and plastic containers that have a wide assortment of inhabitants. When Anthony recently came to visit, we went down to the creek and spent the afternoon catching newts and salamanders. I explained to the children that they could catch as many of them as they liked but we would be leaving them in the creek. That meant they could live out their natural lives and create even more newts and salamanders to catch next time. But Anthony found a specimen he hadn’t seen and was desperate to take it home. His mother arrived to pick him up around that time and I asked her to help me convince him to leave it there out of respect for the animal. It was a tense moment with a clear indication that his mother thought I was being overzealous. The situation also illustrated the larger thought system we all are victims of, “the world was made for humans” and its corollary, “other animals don’t matter.”

It is a subtle, yet enormous shift we are undertaking and one that will take us into uncharted territory. I’m counting on the fact that our children will still catch salamanders and enrich their lives by doing so. It is crucial that they they gaze into those emerald eyes and recognize another being there. Words don’t come into play with this kind of correspondence — it is communion and it solidifies our relationship with the natural world. 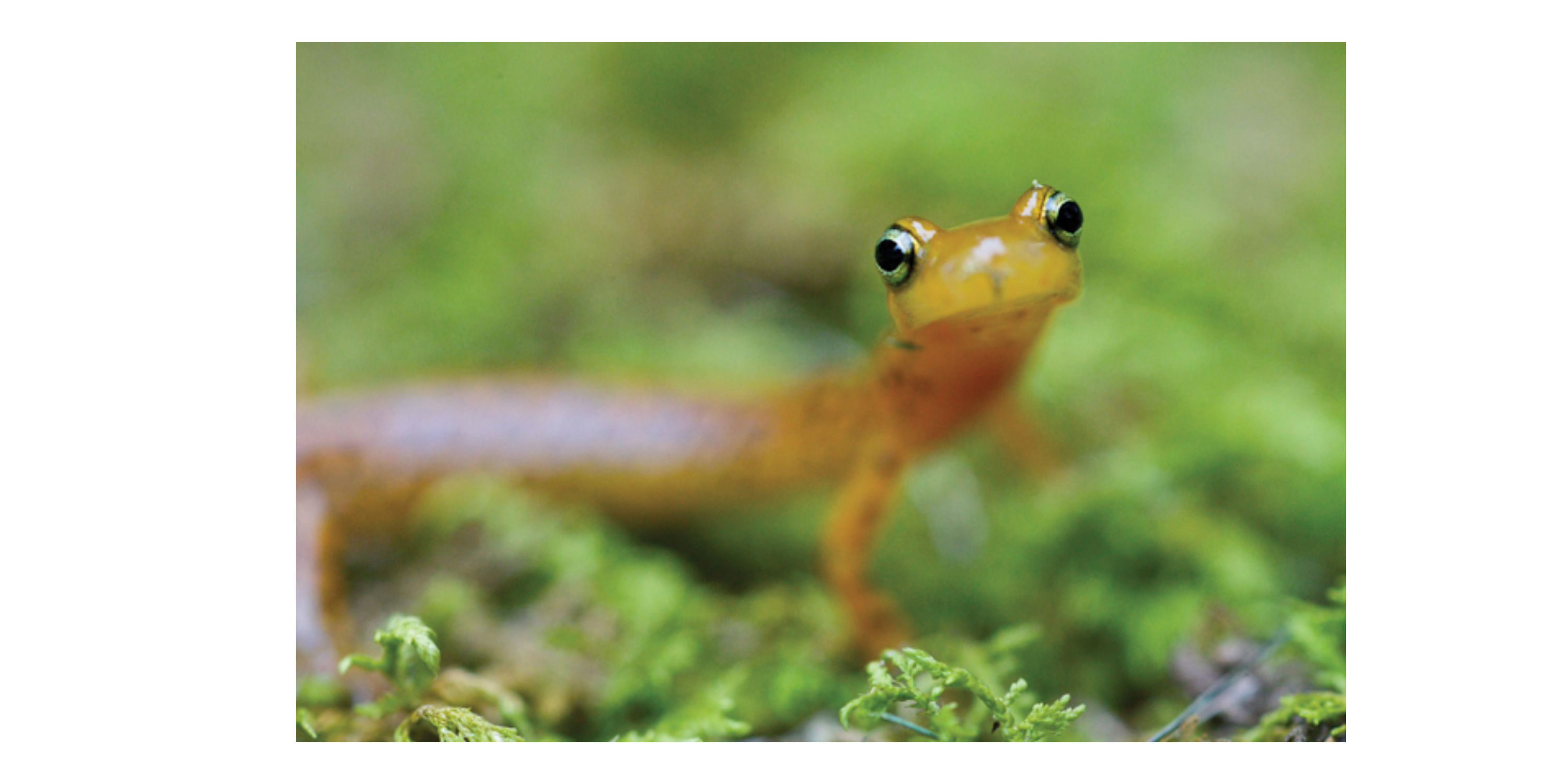 If we inhabited this kind of a world, the iridescent blue belly of a lizard and the stunning beauty of a butterfly chrysalis would be experienced as marvels. We would recognize this endowment of life we are gifted with as priceless and perceive every single thing as part of the continuing story of the universe. Every rock, animal, and tree, every drop of water and breath of air arose from the same atoms that have been recycled endlessly since the beginning of time, fourteen billion years ago. We have arrived simultaneously at a point where we are just beginning to understand these relationships while we also blindly wield the power of life and death over their continued existence. The animals and all of nature are calling us to open once again to a long-forgotten ability, to rekindle our ancient connections with all life. Both the microcosm and the macrocosm substantiate the same imperative – everything is related to us and we are mothers to it all. Because not only are humans responsible for the problems the world faces, we are also the only ones who can assist with the outcome.

Virginia Easterday has decades of experience as an interspecies communication pioneer. Her strong emotional and spiritual connection to animals and nature taught her that we are undoubtedly able to communicate with a wide array of other species once we let go of our attachment to words and language as the only acceptable means. Her nonfiction book Star Soup: Universal Lessons from Other Species is pending publication. Easterday was a research assistant for Michael, the gorilla, with Dr. Penny Patterson of the Gorilla Foundation in Woodside, CA. Michael and Koko, his more popular gorilla companion, use American Sign Language to communicate with their human caretakers. Easterday also served for a number of years on the Board of Directors of Interspecies Communication, Inc. (IC), a non-profit foundation in Friday Harbor, Washington. http://www.interspecies.com. This organisation is dedicated to re-invigorating the human species’ emotional, spiritual, and cultural ties with nature. Author Easterday participated in many IC expeditions to meet cetaceans and interact directly with them using music as a medium. Easterday is also a sculptor of cast glass. Nature is Easterday’s inspiration and glass is the ideal medium to reveal the beauty and majesty of its countless forms. Art parallels interspecies communication since it does not entail language. Glass lends itself well to Easterday’s work, which aims to deepen our relationship with our Earth community and encourage reverence for nature. Her message is communicated through speaking, writing and glass sculpture. See http://www.virginiaeasterday.com for more info and to subscribe to her blog.